We aim to use the enormous amount of rain that falls on Ardtornish, over 90 inches a year, to produce electricity in a way that doesn’t damage our environment. The rain fills our rivers and reservoirs, and the energy from the weight of water travelling under pressure down our pipelines (known as penstocks) turns specially designed turbines.

The turbines spin generators which produce electricity. The water returns to the river and from there flows to the sea. The electricity is sold to the national grid, providing Ardtornish with the income it requires to help do the things we need to do, and consumers with a supply of green, clean energy.

On the river Rannoch, we have replaced the earlier 1996 ‘run of river’ hydro scheme with a cascade system of three independent hydro schemes. The two furthest intakes divert additional water, via a low pressure aqueduct pipe into Loch Tearnait, which acts as a water storage reservoir. The loch is fed by both these new water intakes and the river and burns that flow into it naturally. The Tearnait hydro intake feeds this water into the 1000m long penstock which creates a 60m head (i.e. 60m pressure of water) at the new Tearnait power house at the eastern edge of Strath Shuardail.

Having produced up to 700 kW of electricity in that (the Tearnait) power house, the water returns to the river and fills the newly-created Lochan Lùb an Arbhair (translated from the Gaelic as the bend or meander around the corn field). This new loch was created by the 2012 Rannoch Dam – probably the largest thing to be built in Morvern since Ardtornish House in 1884. The water flows from dam down another penstock, generating a 69.5m head and up to 1500 kW of output at the Rannoch Power House.

From there it re-enters the river, and few hundred metres downstream the water is impounded again. This time it enters a low-head pipe under the road, emerging again at the top of a new (2016) Archimedes Screw Turbine, which sits beside the river at Achranich. It uses the water a third time, before finally it is discharged into the river to flow the few remaining metres downstream and downhill to the sea.

We calculate that we use all but a very few metres of head to generate power from the top of the cascade to the bottom.

In 2015 we completed another 800kW scheme, at Uileann in the White Glen. It catches water from three sources, but has no water storage capacity – so is known as a ‘run-of-river’ hydro. Like Tearnait and Rannoch, it uses a turbine built by Gilkes of Kendal.

During 2017 we built a final hydro power station, the Socaich scheme, which catches water from several intakes on the Achranich hillside and diverts it into Lochan Lùb an Arbhair. Before flowing into the lochan, it goes through a Gilkes turbine, producing up to 325 kilowatts of power. The extra flow into the lochan joins the other sources to flow through the Rannoch turbine, generating again. Then it enters the Archimedes screw turbine – so, like water passing through the Tearnait hydro scheme, each drop passing through the Socaich scheme is used three times before finally flowing to the sea. 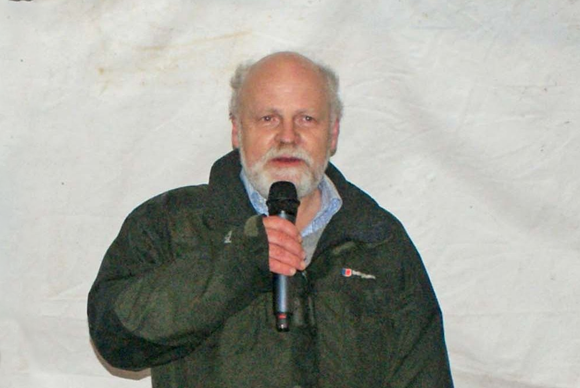 Angus Robertson started investigating new hydro opportunities in 1986.   Our first scheme was built by a local firm, McGillivray Ritchie, in 1996.  It had 700 kW output, and was decommissioned in 2012 to make way for the more efficient scheme.

We already pay benefits generated by Tearnait and Rannoch Hydro Schemes Morvern Community Trust (MCT). Ardtornish Estate was amongst the first private developers to commit to a scheme of this nature.

The application form and supporting guidance notes can be found by following the links below.

We already pay benefits generated by Tearnait and Rannoch Hydro Schemes to Morvern Community Trust (MCT). It has an application process of its own. Ardtornish Estate was among the first private developers to commit to a scheme of this nature.

Dec 2019 – £913.00 Three Lochs Book and Arts Festival. We were able to contribute £913.00 towards the Schools Programme aspect of this biennial Festival. They will be taking an experienced author/tutor to each of the schools in our area to deliver sessions to both lower and upper primary groups.

July 2019 Coisir Og Loch Alainn – Junior choir £520.00. We were able to assist this talented group to purchase kilts for each of their members.

Feb 2019 CAOLAS – Community Association of Lochs and Sounds £1,250. We made a contribution to assist with the development of a marine data project. This will be achieved through a Citizen Science approach, involving our local communities and other interested volunteers (Seasearch), in the collection, mapping and analysis of information about the biodiversity of our local marine environment.

May 2018 – £207.00 Lochaline Little Otters Nursery To enable the group to buy growing & gardening equipment for the schools allotment plot.

May 2018 – £650 Morvern Games & Gala week Funding for the traditional Pipe Band along with a display of Highland dancing.

Jan 2018 – £1,250 Rahoy Hills management committee
To support the analysis of data and the compiling of a report on the changes in bird populations in Arienas wood in relation to changes in habitat over the past thirty years.

Feb 2018 – £1,292 – Lochaline toddler & baby group
To refurbish the storage container where they keep all their toys, bikes, equipment and crafts for playgroup activities.

September 2017 – £240 – Scottish Wildlife Trust For the installation of a temporary heating system to prevent the deterioration of artwork.

May 2017 – £600 – Scottish Wildlife Trust Awarded for the installation of a professional picture hanging system for the new Boiler House gallery opened on Ardtornish Estate. Main purpose is for the wider promotion and appreciation of The Rahoy Hills Nature reserve.

June 2017 – We have awarded Bùrach our local Gaelic choir £800 so that they can attend and support the up and coming Gaelic contemporary duo ‘’WHYTE’’ at the Contemporary Centre for Arts in Glasgow in June.

May 2017 – Morvern Games and Gala week – £1,300 Commemorative medals for every participating child to mark the 30th anniversary of the event.
Funding for the traditional Pipe Band along with a display of dancing from the Jane Douglas school of Dancing in Fort William.

April 2016 – £70 worth of Ardtornish Estate Meat given to Lochaline Primary School for the orienteering walk BBQ.

June 2016 – £50 worth of Ardtornish Estate Meat given to Ardnamurchan High School for their open day.