I am very pleased to present this newsletter on behalf of everyone at Ardtornish and many thanks for the contributions from colleagues. The first 6 months of 2017 have been very busy and with such a great team of people working here, I am confident that we will get through the workload. There is much going on as will be revealed over the next few pages. We have even reached the old Ardtornish Road and its long overdue repairs! I can think of a few people who will be very pleased. However, it is still work in progress and much to do.

The event to celebrate the opening of the Archimedes Screw, on a lovely summary evening, in May was extremely enjoyable. The great metal cylinder behaved to order and started turning on cue. Angus, his team and the contractors are to be warmly congratulated on completion of this project. It is indeed a centerpiece in the body of the estate. Thanks to Dr. Michael Bramble for christening the screw with some wise words and a little whisky!

If anyone would like to feed anything back to me or has any questions about the estate, please feel free to contact me through the office switchboard or on my e‐mail address below.

Following on from previous business planning and recent Board approval to bring 5 further properties back into the holiday letting portfolio, the maintenance team has started the in-­‐house project to renovate Torr Molach. A big part of the initial phase is road repairs and ground works to the rear of the house. The road from the sharp bend by the Keeper’s Path gate to the drive is being stabilised and hardened. Earth is also being excavated from behind the house and east gable to improve access and drainage. The front porch and garden shed have been demolished. (Hugh is very happy, as the porch was rather unedifying!) The interior is being stripped back where required to bare walls. The other properties are Castle Cottage 1 (Caroline and Colin moving to their new house in the village), West Pier House/old Post Office, Arienas House & the old Kennels.

A large swathe of resurgent rhododendron ponticum has been cleared from behind the House, between Craighbhea, the water tower and the iron stag. The next section running towards Craigendarroch is underway.

The shepherds gathered Glensanda at the beginning of June, returning with 22 ewes and lambs, which are kept in at Acharn and will be sold in the autumn when we start to clear Be-­‐ach and Altnahonaich. Clipping is in full swing.

Ardtornish regular Dr Mike Lock, enthusiastic entomologist and birder, was thrilled to discover at least a dozen chequered skippers in the Black Glen. This is an extremely scarce butterfly confined to a few isolated populations on the west coast of Scotland. There&rsquo;s a small colony at Ariundle that is the likely source of this expansion.

Andrew Raven Trust SCO39488
The Trustees of the Andrew Raven Trust have just hosted a very special weekend in Ardtornish House The Voice of the Writer: Language, Land and People. This marked the launch of new publication entitled ‘Notes from Morvern -­‐ 10 Years of the Andrew Raven Trust 2007 -­‐ 2017′ which includes ten specially commissioned essays by Adam Nicolson reflecting on the themes of past weekends and a reflective essay by Simon Pepper OBE, Founding Chair of the Trust. As well as the book launch, contributions were made by poets, playwrights and thinkers from around Scotland and Burach, Morvern’s own community Gaelic choir, led by Riona Whyte, set a high note on the Friday evening with their outstanding programme of Gaelic songs.

Copies of Adam’s book are available from the estate office for £23.00 incl. P&P. Please contact Angus or Alan.

Rob Brett presented his first draft of the new Strategic Land Management Plan for Ardtornish to the family and board in June 2017 welcoming feedback and comment. It looks carefully at our planning, stewardship, and management of the estate over the next 25 years and indeed beyond and suggests some action points, a number of which are now underway. A compelling and interesting document it covers key areas of estate activity and offers a superb blueprint for our work in ensuring that the estate is kept in the best possible fettle for generations and visitors to come.

The opening of the screw was our big news in May with a crowd of local people attending the ceremony. The picture below shows how splendid the area around the screw installation now looks. On-­‐going joinery work to complete the ornate barge boards and fascias is in progress, creating an opportunity for our estate joiners to produce some very intricate carpentry befitting of the building’s design. Again thanks to all involved.

One of the most satisfying projects to come from the work on the Archimedes Screw has been the installation of two electric vehicle charging points in the car park area at the Bracken shed. Our chairman, Dennis Overton was the first to use the charging points and he reported an excellent experience! Dennis is photographed below. 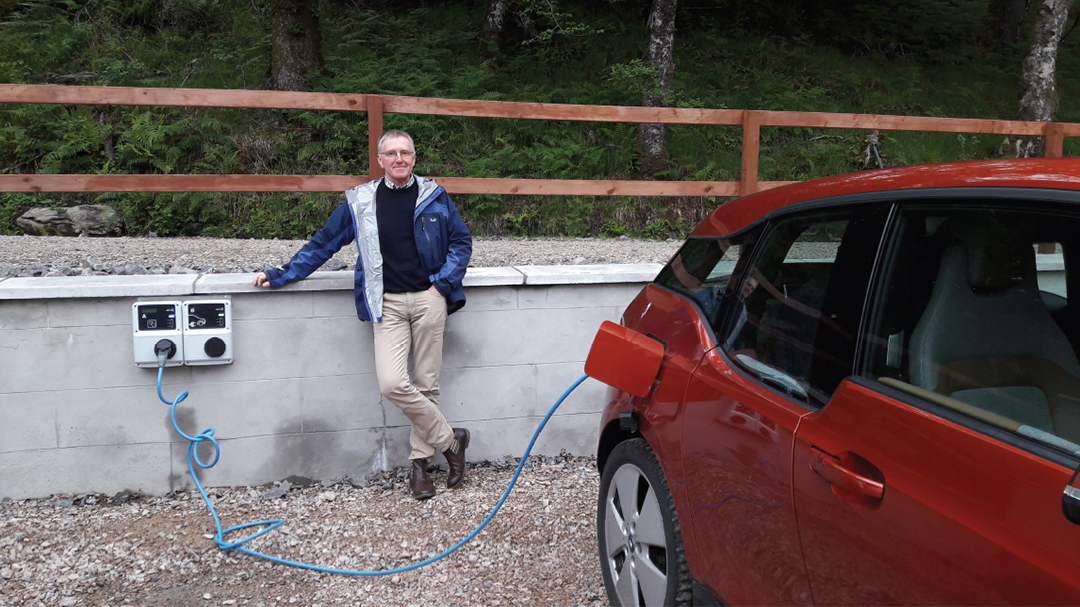 In Other energy projects, work on both the Socaich extension and the new Biomass II project continue with pace and I am delighted that we have reached agreement with the family for a design of the new boathouse/generator building near Rannoch dam.

The season is in full swing, with the welcoming of lots of familiar faces along with many new.

Events have kept us very busy as May welcomed the second Ardtornish bride of 2017 bringing with her a mixture of 115 family and friends. Feedback received was overwhelmingly positive with many guests saying that they will be sure to return with their own families in the future.

The event theme continued through to June as we welcomed back the organizers of the Piano retreat for a second year. International delegates attended from as far away as Singapore, giving us a superb opportunity to showcase Ardtornish to a much wider audience. Success indeed, as the retreat has secured dates through to 2020.

Exciting news as the restoration and reupholstering of the original Howard & Sons Ltd sofa is complete and takes pride of place back in the South-wing Drawing room.

The new staff in housekeeping and the office have bonded well and there is fresh impetuous to their work after a destabilizing start to the season through various staff changes.

A Word From Our Family Director – Hugh Raven

Dennis, Susan, Tony and Hugh met community representatives in Lochaline Village Hall in early June, to discuss collaboration between the estate and community, plans for development in Morvern, and opportunities for collaboration. Morvern Community Development Company is designing a community consultation questionnaire about the proposed Living Landscape project. Rob Brett’s report on ecological restoration at Ardtornish took a further step towards completion, and Hugh met Matt Fleming, Tim Sheldon and Richard Miles to discuss deer policy and stalking at Ardtornish, and the recommendations in Rob’s report.

CAOLAS, the organisation promoting the community’s voice in local marine management, organised a series of talks by Dr Mark Woombs on the exceptional marine biodiversity in Loch Sunart, including in Lochaline, Strontian, Kilchoan, Acharacle, Ardfern and Tobermory. The next step is to constitute CAOLAS as a Scots-­‐registered charity, and raise funds for a Marine Community Support officer.

Keri Langridge from Scottish Wildcat Action reported that from the 115,000 images taken by camera traps in Morvern, many cats were identified. All appear hybridised to an extent, though three were identified by their markings (‘pelage’) as meeting SNH’s criteria as wildcats.

The pontoons and visitor facilities in Loch Aline have had a good season, with more visitors that previously and a consequent increase in turnover. Their new swinging moorings have proven popular.

Hugh has joined the board of Crown Estate Scotland, which controls much of Scotland’s seabed, as well as rural estates in Cairngorm, Moray, and the Borders.